There’s a real skill when it comes to making macarons, something I didnt quite appreciate when embarking on this baking challenge. I was feeling rather cocky, perhaps high on my last French-baking success. I decided that I didn’t want to make just regular macarons, I wanted animal macarons! I wanted bears, rabbits, unicorns and more!

But alas, I was rather foolish, and what follows is a what not-to-do guide when making macarons.

Let’s for a moment think about macarons in terms of their shells. The perfect macaron shell must satisfy two requirements: cosmetic and textural. Cosmetically, the macarons must have a spherical, domed shape, the top of which is shiny, smooth and void of cracks. The shell must also contain “feet”, a chewy base to the shell that has a rough, sandy look. 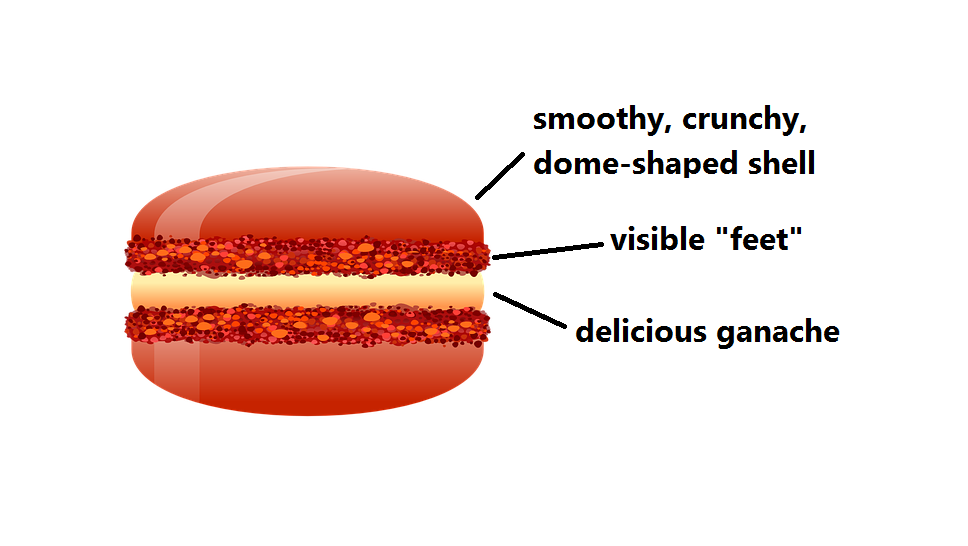 Texturally, the outer macaron shell should be crunchy, while the inside should be marshmallowy and chewy. This crunchy-chewy textural dichotomy makes macarons moorish.

The impossibly high cosmetic and textural standards of a macaron make them a bit of a nightmare to bake, especially when considering the simple-looking recipe. Most macarons are made by mixing almond meal, icing sugar and egg whites to form a paste. A meringue is then incorporated into the almond paste to form a batter, which is then piped and baked to form macaron shells.

At a distance, this recipe seems rather fool-proof, but I assure you, that many things can go wrong! From beating to piping, creating the perfect macaron shell requires a great deal of skill. Thankfully, science is here to help us iron out the most common mistakes.

Below, I identify three types of ill-formed macarons, that I call mistakarons, and simple remedies to success.

When you’ve spent several hours baking, it can be disheartening to find your macarons resembling your former pubescent self: skin crackled, pimpled and blistered. But it happens. Shells can come out of the oven with cracks, a bumpy surface and most insidiously, a small alfafa-esque peak.

The good thing is, beauty is only skin deep, and these macarons (that you’re really only interested in because of their personality) still taste crunchy and chewy. But if you do want to superficially spruce your shells, I have one word for you: macaronage.

Macaronage is the term used when combining the meringue with the almond paste. If the macaronage process isn’t done quite right, it can lead to either very dense or very flat macarons. The former is the reason for your pubescent mistakarons.

During the macaronage process, you need to let go of every instinct that you have as a baker. Intuition tells us that when incorporating a light and airy meringue into a gooey paste, we need to retain as much air as possible. So as bakers, we carefully fold-in the meringue, until it is just incorporated. I URGE YOU THOUGH, LET IT GO!

The macaronage process actually requires you to BEAT OUT some of the air in the meringue. This will feel like the most criminal moment in your entire baking life, but trust me, it’s what the macarons want, no, NEED! An airy macaron batter is actually quite thick and will hold it’s shape a little too well. When you go to pipe this thick batter, a small peak will be left behind which will not collapse. Therefore, the shell will come out like a spinning top.

To avoid this, the meringue should be mixed with some force. As you fold the meringue into the almond paste (using a spatula), press the mixture down on the sides of the bowl. This will deflate some of the air. Keep doing this until you batter is smoother. Some people say to achieve a batter that resembles ‘magma’, but the last time I checked, most of us aren’t living next to active volcanoes with a safe, yet generous supply of lava. So I’ll share some practical advice with you instead that only involves a teaspoon.

Take a teaspoon of the batter and put it on a plate. Initially, you will get a heap of batter with a tiny peak at the top. If this peak collapses within about 10 seconds, the macaronage process is complete and the batter is ready. If the peak is still present, then keep working the batter.

When Kevin Bacon told us to get “Footloose”, this is not what he had in mind. Macaron shells that are flat, cracked and have no feet are an unfortunate sight and don’t even have the redemption of tasting delicious. They’re ugly inside and outside. However, assuming that you have made the batter correctly, it is easy to fix.

Feet form due to expansion of air during baking. When the macaron batter is placed in the oven, the mixture heats and the air inside expands. As the air expands, the macaron rises, and feet begin to form. This process is interrupted if the air escapes, which occurs if the macarons have not been properly rested.

Resting allows the external surface of the macaron to dry out, forming a “skin”. This skin traps the air during baking, allowing your macaron to rise. Flat and cracked mistakarons occur as the skin has not formed. During baking, the air escapes from the top, cracking the surface, resulting in flat pancakerons.

Baking time is incredibly important. You need to give enough time for your macarons to rise and form feet. You also need to allow time for those feet to set, without burning your macarons.

Somehow, in my infinite prowess as a cook, I managed to achieved both flat AND burnt macarons. To achieve this miracle, I put rested shells in the oven and excitedly watched as feet started to form, but as I took them out, the feet began to collapse almost immediately. So I popped them back in. However, instead of reformed feet, I was left with a burnt shell.

This little misadventure demonstrates the importances of baking time. The recipe I used called for 12 minutes at 150°C. However, my feet didn’t quite set in this time frame. So 1 or 2 minutes longer would’ve been better. Any longer, and the macaron will start to burn.

I recommend doing a practise run in your oven. Test a small batch first and check how long it may take. Remember, every oven is different and temperatures can vary drastically between models.

If all else fails: blitz!

Despite my tips on avoiding mistakarons, you may still be left with turmoil on a plate. Alas, making macarons takes a lot of skill. But even if your shells are cracked or flat, you can still use them in inventive, if not slightly scandalous, ways.

With your cracked or flat macaron shells, place them in a food processor and blitz into a fine or coarse powder. This sounds sacrilegious but this macaron dust makes an excellent addition to a range of desserts. If you are going down this way, bake your macaron shells for a little longer in the oven, so they’re not too gooey. 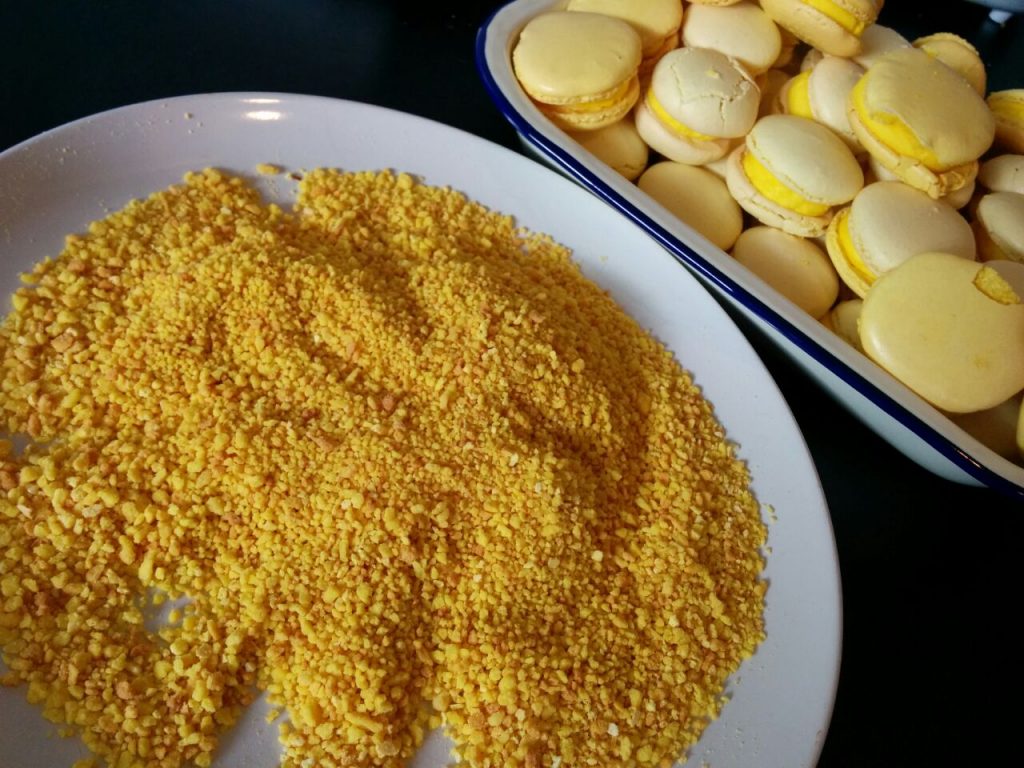 The macaron dust adds great crunch to a dessert. Here’s some ideas:

It’s quite impressive when you tell your friends that you have used macaron dust in a dessert. It makes your mistakaron feel 1000% more luxurious. So whether you’ve made macarons or mistakarons, you will be a winner! 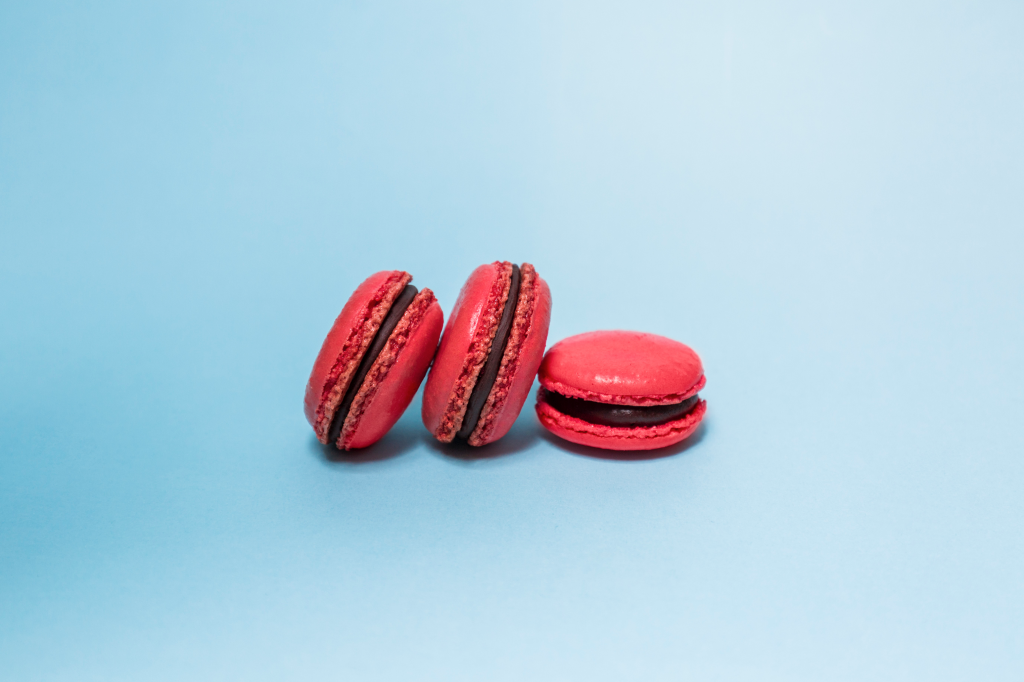 56 Replies to “Macarons: Mistakes to Avoid for Marvellous Morsels”